For What Crime Was Nehor Executed?

Those who are interested in legal issues relating to the Book of Mormon will be interested in a superb book published by by John Welch on the legal cases in the Book of Mormon. In a recent essay in this book, Welch argues that the case of Nehor may have posed an interesting legal problem for Alma the Chief Judge in the first year of the reign of the judges.  (“The Trial of Nehor,” The Legal Cases of the Book of Mormon. Brigham Young University Press and the Neal A. Maxwell Institute for Religious Scholarship, 2008, 211-35).

We are told that following the death of Gideon, the killer Nehor, was apprehended by the people and taken to Alma, where he was able “to plead for himself with much boldness” (Alma 1:11). How could Nehor have defended his actions?

Welch offers several possible lines of defense for Nehor in light of the law of Moses which was observed by the Nephites. Nehor may have argued, for example, that his killing of Gideon was not intentional. Intentional homicide was punishable by death (Numbers 35:17; "the murderer who deliberately killeth" 2 Nephi 9:35). For example, if the victim was smitten “with an instrument of iron” or by one “throwing a stone” causing death, the perpetrator was considered guilty of murder if he had been “laying in wait” to kill the victim (Numbers 35:16-21), which would show premeditation. Unpremeditated killings, however, did not require capital punishment, although the perpetrators unable to escape to a city of refuge might be slain by relative of the victim (Numbers 35:15, 19). “Biblical law seems to have recognized the element of fighting as a mitigating factor in settling the liabilities of men who had been parties to a brawl” and “Presumably, some leniency was normally shown in cases where people acted improperly but under the heat of an altercation, or if injury was caused inadvertently as a consequence of a scuffle” (225).

Welch observes that in the case of Nehor, both men had apparently fought before Gideon was killed in the confrontation (Alma 1:9). According to Welch, Nehor may have argued that Gideon’s death was unpremeditated and that Nehor was not laying in wait for Gideon and that he did not start our with the intent of killing the man.

Priestcraft was considered an evil (2 Nephi 26:29-30), but not illegal itself under the law of Mosiah. There apparently was no legal punishment specified for priestcraft if people professed to believe what they taught (Alma 1:17). For this and other reasons discussed by Welch, the case of Nehor posed a particular legal problem under the law of Moses as practiced by the Nephites. He also discusses several other additional factors that may have been relevant to Nehor's defense.

“In the final analysis, Nehor was executed not for murder, and not for priestcraft, but for a composite offense of endeavoring to enforce priestcraft by the sword (Alma 1:12). Alma’s judicial brilliance is evident in the way he fashioned this ruling. As suggested above, a simple charge of murder was problematic (if not precluded) under Numbers 35, and as far as we know, no human punishment was prescribed for priestcraft alone in any specific text. By innovatively combining these two offenses, however, Alma was able to convict Nehor of killing for the culpable purpose of enforcing priestcraft. . . . I would see Mosiah’s law against murder as supplying the element of the actus reus necessary for Nehor’s conviction, while the moral and religious turpitude of priestcraft can be seen as providing the required mens rea sufficient to support a verdict requiring capital punishment.” (227)

Welch also observes that in the aftermath of Nehor’s execution his followers instigated persecutions “with all manner of words” and that some members of the Church “began to be proud, and began to contend warmly with their adversaries, even unto blows; yea, they would smite one another with their fists” (Alma 1:22). “Significantly,,” notes Welch, “they hit each other only with their fists because the case of Nehor had made it clear that it was illegal to enforce one’s religious beliefs with a weapon, but the holding said nothing about other kinds of striking” as long as they were not intended to kill (234).

Welch’s book provides a wealth of insight into the many ancient legal aspects of the Book of Mormon and the reader will be amply rewarded. 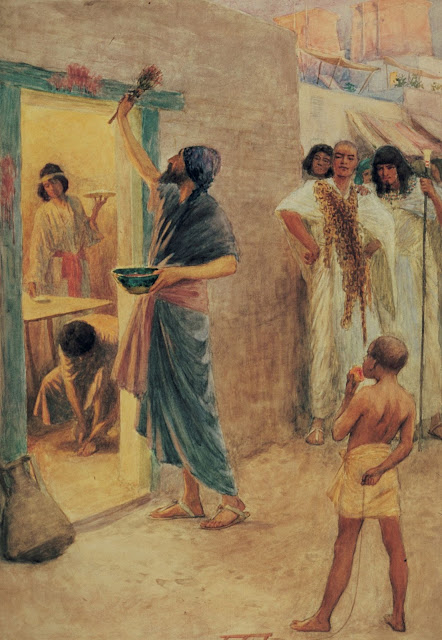 When in bondage to the Egyptians, the Lord commanded the children of Israel to take a male lamb without blemish, sacrifice it, take the blood of the lamb, and put some of it on the door posts of their houses (Exodus 12:5-7). And when the Lord passed through the land to destroy the firstborn he promised:

“I will execute judgment . . . And the blood shall be for a token upon the houses where ye are: and when I see the blood, I will pass over you, and the plague shall not be upon you to destroy you when I smite the land of Egypt” (Exodus 12:12-13).

Israel was commanded to commemorate this feast annually, during the Jewish month (around March or April).

“And this day shall be unto you for a memorial; and ye shall keep it a feast to the Lord throughout your generations” (Exodus 12:14).

Latter-day Saints and other Christians believe that the Israelite Passover pointed to the redemption of Jesus Christ whose blood was shed to provide an atonement for our sins (See for example Donald W. Parry and Jay A. Parry, Symbols and Shadows, 2009, 64-67).

The Book of Mormon records that the Nephites experienced great destruction among their people at time of Jesus’ death. These events commenced at the beginning of the thirty and fourth year on the fourth day of the first month of the new year (3 Nephi 8:5). While we do not know the details of the Nephite calendar, which may have differed in many respects from that in Judea, I assume that the Nephites, when they kept the law of Moses, would have celebrated some form of Passover at approximately the same time as the Israelites of the Old World. Under this assumption several elements of the events described in Mormon’s account in Third Nephi are worth noting.

First, the three days of darkness among the Nephites (3 Nephi 8:19-23; 10:9) obviously recalls the three days of darkness over Egypt when the children of Israel were delivered from bondage (Exodus 10:21-22). This event would have clearly reminded the people of Lehi of the darkness of Egypt. Unlike ancient Israel, however, the Nephites did not have light in their dwellings (Exodus 10:23). The darkness seems to have enveloped everyone. The universal nature of the darkness, whatever its physical cause, would have suggested that the Nephites that by breaking their covenant obligations as a people they had become like the Egyptians and so the Lord was treating them as such.

Second, following three hours of terror and destruction, Jesus announced from heaven the destruction of numerous cities which he had caused to be destroyed (3 Nephi 9:9-22). The inhabitants of those cities rejected the gospel messengers which had been sent to them from God. Rather than repenting of their sins in order to be saved by the blood of the Lamb of God, they persisted in their iniquities and abominations and ironically shed the “blood of the prophets and the saints” (3 Nephi 9:5, 7, 9, 11). Those who were “saved” from the subsequent destruction were considered “more righteous” than the others because they had “received the prophets and stoned them not; and it was they who had not shed the blood of the saints, who were spared” (3 Nephi 9:13; 10:12).

The events described may be interpreted as an ironic reversal of the Passover blessing of protection and deliverance. Having rejected the atoning blood of Christ, the wicked killed the prophets and the saints whose righteous blood stood as a sign against those in these doomed cities, which Jesus could no longer pass by in judgment. The dramatic events, announced to all by Jesus Christ, the “light and the life of the world” (3 Nephi 9:18) from heaven would strikingly emphasize to the people of Lehi the need to repent and return to Jesus and partake of the covenant blessings of protection and salvation.


Posted by Matthew Roper at 2:00 PM No comments:

Some Earlier Posts on 1 Nephi

Since we have been studying 1 Nephi in the Book of Mormon for Gospel Doctrine in Sunday School this month, I thought I would provide a list of some previous posts from Ether's Cave for those who may be interested.

"Irreantum and `Many Waters'"

"No Fire and Raw Meat"

"Laban's Sword of `Most Precious Steel'"

"Names and meaning: Zoram as a Case Study"

"The `Land of Jerusalem'"

"`He Shall Be Born at Jerusalem'"

"The Names Sam and Josh"

"Update on NHM in the Book of Mormon"

"Lehi and the Pillar of Fire"

"Lehi as a Visionary man"

"Neal A. Maxwell on the Great and Spacious Building"

"The 600 year Prophecy and the Birth of Christ"