When I first attended BYU as an undergrad in 1988-1989 I had the opportunity to work as a research assistant with Professor John L. Sorenson in helping update an edition of his Pre-Columbian Contact with the Americas across the Oceans: An Annotated Bibliography. This was my first real introduction to the subject which has often been a topic of controversy among American historians and anthropologists, as well as Mesoamerican scholars. In fact, many scholars have in the past dismissed the subject as the domain of the kooky and badly misinformed. In the past several decades Sorenson's bibliography and subsequent publications, along with those of other careful diffusionists, have been helpful in sifting the kooky and poorly documented from the more sound and solid evidences of Pre-Columbian contact between the Old World and the New.

Many years ago I had the opportunity to hear Professor Michael Coe speak at a conference of the world's leading Maya scholars at Brigham Young University. Although none of the scholars who spoke had the slightest interest in discussing the Book of Mormon, which they properly and politely explained in the introduction, I very much enjoyed the display of insight and learning that was shared. In his remarks, for example, Professor Coe discussed, among other things, Mesoamerican codices (or books). He stated his belief that in Olmec times (1200-400 BC) there must have been thousands of such codices which have not survived.

In 2006 Professor Sorenson and Carl Johannessen published an essay summarizing key findings from the last few decades of research on the issue of diffusion ("Biological Evidence for Pre-Columbian Transoceanic Voyages," in Victor Mair, ed., Contact and Exchange in the Ancient World (Honolulu: University Of Hawaii Press, 2006, 238-97). A popular Summary of this article was published for a Latter-day Saint audience in "Ancient Voyages Across the Ocean to America: From `Impossible' to `Certain,' Journal of Book of Mormon Studies 14/1 (2005): 4-17, 124-25.

After reading the article from the 2006 publication, Professor Coe, who was very interested and pleased with the article, wrote to Professor Sorenson. His letter, dated October 12, 2006, and shared with Dr. Sorenson's permission, reads as follows.

I'm enormously impressed with erudition and research that's gone into your "Biological Evidence of Pre-Columbian Transoceanic Voyages." I think this is the best thing you've ever done!

As you know, I've long been interested in the possibility of contact across the Pacific, and having immersed myself in Southeast & South Asia culture during the past 15 years, I'm more than ever convinced that there were such contacts. Your lone essay is right up there with Paul Tolstoy's 1963 paper on barkbeaters & paper-making on both sides of the Pacific.

In 2009, Professors Sorenson and Johannessen published a detailed and lengthy monograph on the subject entitled, World Trade and Biological Exchanges Before 1492 (New York: iUniverse, 2009). 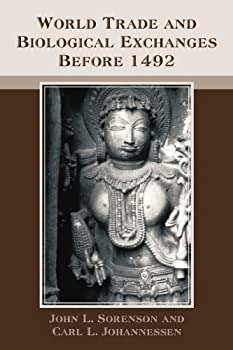 Sorenson sent a complementary copy to Professor Coe who wrote back, thanking John for the book. In an email to John Sorenson dated February 5, 2010 Professor Coe wrote the following.

Many, many thanks for sending me your "World Trade and Biological Exchanges" book. It's an enormously impressive piece of scholarship. I'm really pleased that you've included discussion of nasty pests like hookworm in this compilation.

So much of this evidence, I think, is irrefutable, such as the 1300-1400 AD presence of Polynesian chickens in Chile, or the sweet potatoes story, or the early Chinese peanuts.

If I had another life, I'd devote much of it to proving the interlace between the religions and cosmologies of Southeast and South Asia, and those of Mesoamerica. Unfortunately, I've reached the age of 80, so that's unlikely to happen.

With all best wishes,

John L. Sorenson, "The Book of Mormon as a Mesoamerican Record," in Noel B. Reynolds, ed., Book of Mormon Authorship Revisited (Foundation for Ancient Research and Mormon Studies, 1997), 391-521.

Brice E. Dale and Brian Dale, "Joseph Smith: The World's Greatest Guesser (A Bayesian Statisitcal Analysis of Possible Correspondences Between the Book of Mormon and The Maya," Interpreter: A Journal of Latter-day Saint Faith and Scholarship 32 (2019): 77-189.
Posted by Matthew Roper at 4:00 PM